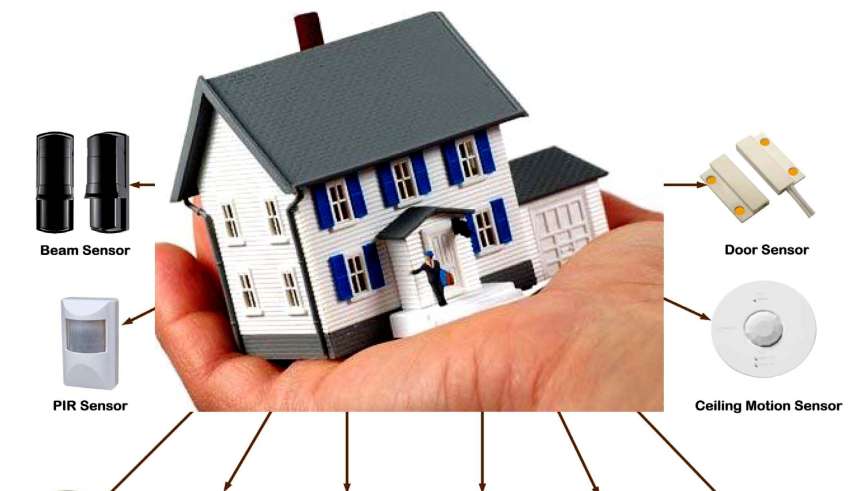 In order to understand how a security system works you must know what it is. No, it is not your basic security system that sets an alarm off in an attempt to scare an intruder away.

A home security system is a combination of sensors, cameras, and software that can detect any number of things, such as fire, flood, theft, and so on. You get the point. The system will usually be specific for one issue, but it can be programmed to handle more than one. Obviously, the most common way that it is used is to deter theft.

This is the center of the system where everything is controlled from. It will be where the keypad is that allows you to turn the alarm on, and off.

The keypad is where you arm the system. This numbered keypad will be present no matter what, even if you have the system set up for remote services.

These are a type of sensors that are placed around the windows and doors. It is made up of two pieces. One is the sensor, and the other is the contact. When the sensor is no longer in contact with the magnet it will send a signal to the control board to sound the alarm, as well as sending a signal to the surveillance company that the system is connected to.

As you would imagine motion sensors pick up movements when there should not be any. They use passive infrared beams to detect body heat.

These sensors are placed within twenty-five yards of windows or glass cases. When the sensor picks up the sound of glass breaking it will trip the alarm system.

These are the sensors that will be placed around the home to pick up changes in the surroundings, such as a fire or carbon monoxide.

A high decibel siren will be connected to the control board and if one of the sensors sends a fault signal to the board it will kick off. Most of the time scaring off any intruder.

Some systems will have cameras attached to the control center as well. These systems will not only show real time actions throughout the night and day, but it will record footage in case it needs to be reviewed.

Putting it all Together

As you would expect a home security system works though the internet to connect to the main servers and the monitoring service. You will need to do a test to answer the question “how fast is my internet?”  You will need to ensure that you have a dependable internet service that can deliver steady service.

You can probably guess how the home security system works, but we will cover it quickly. It starts with the control board where everything is wired into. The sensors will be placed around the home, and the property in some cases, where they can do the specific job for which they are designed. If any of the sensors trip a signal will be sent to the control board, from which it will sound the siren and call attention from the monitoring company.

The monitoring company will usually call the location and ask whoever answers the phone for a password that has been set beforehand. If the password is wrong, or if the phone is not answered, the authorities will be notified. If you are monitoring for fire the fire department would be called.

That is basically all that there is to it. If you look at all the components you would think that this is a complicated system best left for others to install. The fact is that almost anybody with a little knowledge could hook this system up. But of course, you would not be able to monitor the system without some type of company overlooking it all.

Reasons Why Your Fence Didn’t Holding Up This Winter